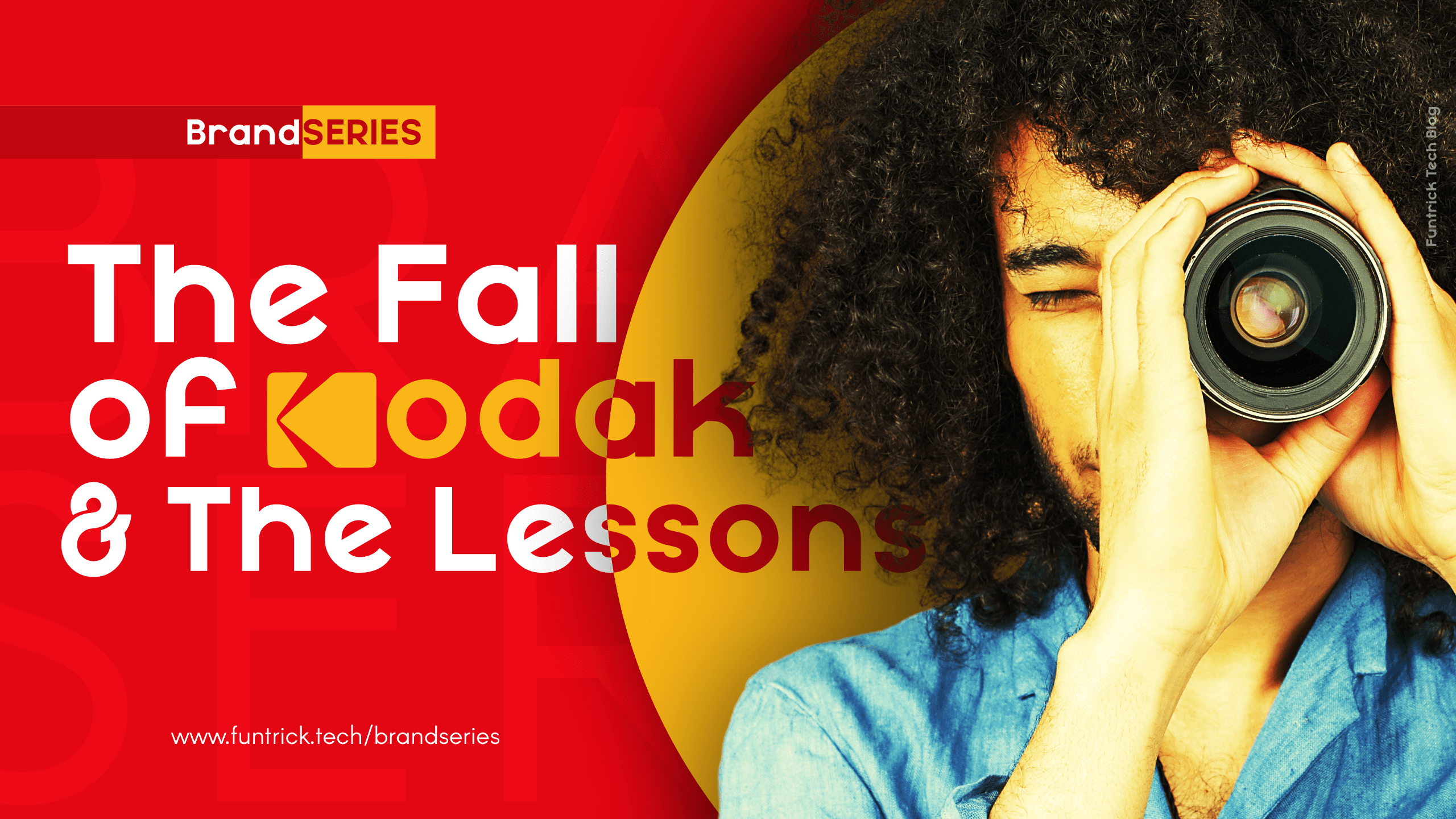 The story of The Eastman Kodak Company is one that every business and start-ups must know and be able to tell at their fingertips. The reason is simple; the failure of Kodak is full of lessons that can preserve businesses who are already in their prime. When you hear the legendary statement of Jesus which says “the first shall be the last”, maybe Kodak should come to mind. From grace to grass may not be such a bad title for any book or movie that should be produced to tell the story of Kodak from 1888 to 2012.

In 1975, Steve Sasson who was serving as an Engineer in Kodak invented the first digital camera. It was at a time when Kodak was on top of the game as the world’s most successful photography firm as almost every photographer depended on its film. Fuji was only trailing behind, very far behind.

Kodak sat on this invention for so many years even though they had researchers who had been studying and improving the limits of the technology. It was either Kodak didn’t quite understood the future or they did but felt they were in control of it. Vince Barabba who served as Kodak’s marketing intelligence head revealed that they conducted research to see how people would adopt electronic cameras after Sony had released their first electronic camera.

The findings were that the ability of Kodak’s film-based photography solutions would be replaced but that would take a decade. Kodak had as much as 10 years to prepare for this and they truly had everything it would take including the loyalty of customers and human capital. Did they take advantage of it? No, they decided to cut corners and see how to get the best of the two. Sometimes, to still hold on to success, we must accept disruptive technologies for what it is. This may mean ditching the success of the past. Let’s see how Kodak tried getting the best of the two.

Instead of replacing film with complete digital photography, Kodak decided to improve the quality of their films using digital solutions. The digital camera was a disruptive invention; it had the potentials to completely replace films which Kodak has been known for. Kodak had photo films, printing chemicals and photo paper and digital camera was a threat to the entire three things that made Kodak the brand that it was. They found it hard to accept and decided to invest as much as $500,000,000 into the development and launch of their failed Advantix Preview film and camera system. What was the Advantix preview film? Its features included the ability for users to preview photo shots and also indicate how many prints they could want out of each shot.

Advantix preview film was a failure from scratch, a total waste of funds which Kodak had to write off. Advantix was designed to be a digital camera which it was but it was also designed to use photo films. This was Kodak’s way of trying to prevent a total shift to digital photography from its business models which had reigned for a long time. Sometimes, businesses fail because of the organisation’s inability to accept an inevitable change.

Kodak’s business failure is considered avoidable, it could have been avoided, they had all it took to avoid it but they were stiff and their failure was brought upon them by themselves.

What would you say of an organisation that chose Kay R. Whitemore who had no appeal for digital photography than Samper who had a strong appeal for it in time as 1989 which was 13years after Steve Sasson’s invention of digital camera?

According to a report by the New York Times, Whitemore had affirmed that he would ensure Kodak stayed closer to its core business in film and photographic chemicals. Samper resigned afterwards and would become the president of Sun Microsystem and eventually the CEO of Cray Research. This proved Whitemore’s ability to have led Kodak into the future if he was given the chance to. Samper stayed as much as three years with Kodak after which he got fired by the board in 1993.

The story of Kodak had continued this way with the renewed intent to pick up in the race when it was too late. Kodak pioneered digital photography; it was invented by their engineer. Kodak’s team had brilliant ideas, they had the truth; based on their research about what the future holds for digital cameras, they knew how to go about it but they failed woefully in strategy because they weren’t willing to be dynamic or change what has brought them success for many decades.

In 1999, George Fisher who left Motorola in 1993 to replace Whitemore after being convinced by Roberto C. Goizueta, the chief executive of Coco-Cola and a Kodak board member, admitted in a New York Times report that digital photography is the enemy, an evil juggernaut that would kill the chemical-based film and paper business that fuelled Kodak’s sales and profits for decades. Fisher was expected to get Kodak back to its feet in three to five years time but it didn’t happen.

Kodak made a lot of mistakes including trying to diversify into pharmaceuticals that it knew little about. They had thought they would do well in pharmaceuticals simply because their chemical business was doing well. It was a flop! Their “digitization strategy” which tried to enhance but not replace conventional film was a flop too! Kodak’s digitization strategy can be likened to building a horse cart that uses a motor engine and fuel.

On January 19, 2012, Kodak filed for chapter 11 bankrupt protections. In 2013, after the Court’s approval, Kodak sold many of its patents for as much as $525,000,000 to various companies including Apple, Google, Facebook, Amazon, Microsoft, Samsung, Adobe Systems and HTC. With the sales, Kodak was able to come out of bankruptcy. While Kodak is still picking up its pieces; in the world of photography, Kodak came, pioneered a lot of innovations, ushered the world into digital photography but undermined the power of this innovation with hesitation to lose hold on what has kept them going to what would keep them going.

Here are some few lessons every business person must learn from the fall of Kodak.

For every business to survive the future, they must be willing to improve. Having a good product should only motivate businesses to get better at it. So many successful businesses died down because they were either slow or adamant in seeing the future and developing what would be fit for the future. Some know where the future is heading to but they believe there is still more time, they are able to project it into the next five or ten years. Oh well, it may sound far but these years are so close that even though you are aware of its coming, the arrival will usually take you unawares when you aren’t preparing for it like it’s coming the next minute. Understand where the future is heading. Get there ahead of your customers and provide them with products relevant for that season.

Act on your information

A lot of people are so good at research and gathering enough information but they are so reluctant to act on it. The real power lies in taking actions, not in just knowing. Kodak didn’t just invent the first digital camera, they assessed the market and realized digital cameras will completely replace film photography but they were so reluctant to act on it

In business, one thing you should never consider is cutting corners. When you realize that business is shifting from one thing to another, the best thing to do is to prepare yourself and be wholly committed to it. Don’t think it would be in the interest of your business when you try substituting old tools for new tools.

The reason for innovations is to make things better and sometimes to replace things that are time tasking and complex. Instead of fully adopting digital photography, Kodak wasted money to develop digital cameras that still operated with films; the very films that digital cameras were meant to replace. Cutting corners will cost you a lot.

Kodak seemed to have attached emotions to its traditional business model. They traded the future by remaining loyal to their traditional model instead of being loyal to the future. It is okay that Kodak created a lot of memories for people in the 20th century but people want more and if you aren’t giving them more, they will switch brand. It is great to be passionate about what you do but don’t be obsessed with today’s success. Be willing to switch to something different as long as it keeps you successful.

Be ready for change

This whole thing boils down to change. Change remains constant in life and you must be ready for it. Do you remember the days of vinyl? Oh well, except those who opt for the decorum it gives to their interior design, no one cares so much about it. Every business must be willing to compromise when the future is a threat to their business models. For a business to stay relevant, it must be able to adapt and be compatible with what people finds relevant.

What other lessons can you see from Kodak’s fall? Let’s read from you.

Your Brand is A Person

You don’t make sells online? This is why!

How To Build An Irresistible Brand